For the next ten days, my resistance against fascism is to sit with an enby who has just undergone surgery. The kind of person and surgery that self-proclaimed “decent folk” believe is an abomination worthy of death.

If you are one of them, fuck off. 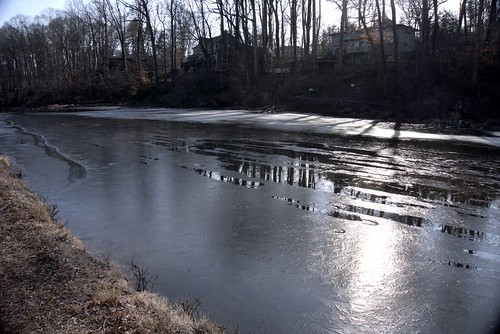 Yesterday, my friend and I were out walking along the Delaware Canal Towpath in Morissville, Pennsylvania, having a lovely day. Part of the canal is still frozen, and we made a hobby of seeing if we could break the ice using whatever rocks we had to hand. The sound of an ice sheet fracturing is really unique. Not precisely like glass shattering, because the fracture and stresses race down the ice sheet, even if the break only happens in a small area. I lost count of the number of significant rocks that I hurled into the ice that simply got embedded.

We are pretty much minding our own business when an old man walking the other direction starts demanding to know where we’re going “dressed like that” and telling us “you’re not real girls”. He proceeded to hurl invectives after us for long after we could hear him. He even proclaimed just how great it must be to have wealthy parents who will support my “lifestyle”.

When I was twenty, I clawed my way nearly to financial independence to be free of my parents rules. I’ve been on my own ever since. I wanted so much to walk up and tell him precisely how much I get paid for my skills at a job that keeps me in air conditioning. The idea of shaming him into silence was almost overpowering. I am a professional in my field, not even 40, nearly at the top, and I make more money than he likely ever has.

How pathetic. Long after we could no longer hear him, we could see him still yelling at us. He had nothing better to do with his sorry excuse for a life.

It is very difficult to walk away silently. I cannot help but feel that I accomplished nothing. That there is no victory to the high road. But that perhaps there is nothing to be accomplished in my reply.

I so rarely face actual transphobia on the streets. So rarely that I vacillate between being shocked when it happens, and shocked that nobody even looks sidelong at me, even when I’m in a small town. For the rest of our walk, we kept our eyes out. We have no idea what the old man may have done. Perhaps he called the cops on us, as has happened so often to people like us. If he did, they ignored him and we continued the rest of our day unmolested.

So often, the narrative is that we are a threat to “Decent Folk”. Somehow, trans queer reality is so powerful that all wholesome goodness breaks down around us.

Decent Folk poke their noses into other people’s private lives.

Decent Folk vote for a fascist, rapist, traitor because he pedals lies of prosperity.

Decent Folk vote for one who promises more power to those with power.

Decent Folk are so easily duped with fascist lies.

We are the ones who take in those not our kin. Teenagers thrown out of their homes for being gay, lesbian, transgender, bisexual, asexual, intersex, polyamorous. Strangers moving into a city where they can be safer.

If we could, we would walk away from your fucking “decent” culture. We would separate ourselves and build a civilization of our own. We would interact with you only to rescue the queers who emerge amongst you.

But you won’t permit that. You “Decent Folk” have all the power. So fuck you.